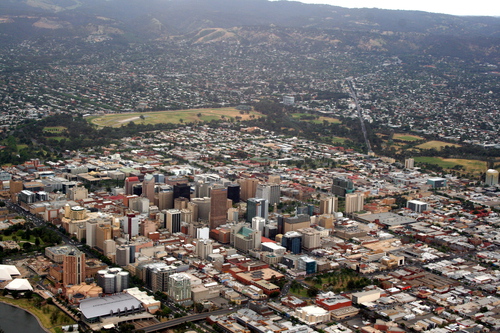 Photo of the Adelaide CBD by Mozul

Two comments I submitted on articles on the AdelaideNow website (the online version of the Adelaide Advertiser):

AUSTRALIANS will stand up for the flag and the anthem but not for their mates when it comes to buying Australian, a study suggests.

Social analyst David Chalke said that as the recession continued, people would become even less inclined to buy domestic products which cost more than an imported alternative.

“I think we’re going to hunker down a bit more,” he said.

I would love to buy Australian and help people here, but as a computer guy I don't have a choice than to buy from overseas, all the stuff I get is from the US, Taiwan, Singapore, Japan and Korea. Even though I'm Aussie I've lived most of my life overseas and I realise the reality that some places are better at producing things than other places, it's Economics 101. Food I proudly buy Australian at the supermarket not just because "it comes from here" but because of it's superior quality.

Perhaps with further local development and investment in education I could one day buy my electronics from Aussie companies too; I certainly believe the entrepreneurial spirit and creativity needed are already here.

THE much-vaunted $118 million Gallipoli underpass – open for just over six weeks – has become a nightmare for commuters during afternoon peak-hour.

Thousands of motorists are now being caught in anp exasperating daily crawl – but authorities say drivers will have to put up with the problems for now.

During Friday night’s rush hour, traffic banked up more than 1.5km between the Anzac Hwy turnoff on South Rd to Greenhill Rd.

The almost daily gridlock occurs because Anzac Hwy commuters are forced to give way to south-bound underpass traffic.