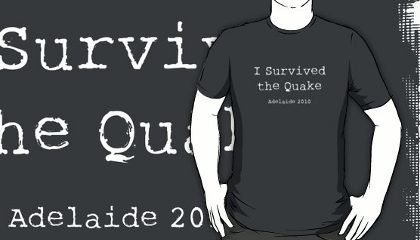 Why is it that interesting things happen in Adelaide when I'm away? And can we say traditional news is dead yet?

According to latest sources a 3.something magnitude earthquake (to use the very technical seismic lingo) with an epicentre on the Adelaide Hills struck this evening. In the past this would have been talked about over breakfast with co-workers, friends and school mates the next day, but in Twitter instant news land I was reading about it within minutes of it happening.

As I discussed last year when it took the television news broadcasts in Adelaide an embarrassing half an hour to acknowledge earth tremors in Indonesia where a very close friend of mine lives with his family, Twitter was abuzz with the news and even had people selling shirts before the major news services reported on it.

Newsweek recently changed their focus from reporting news, to analysing it. I get the feeling that for outlets like television and newspapers to survive with the onslaught of almost instant internet news, a broader adoption of this approach may be needed.