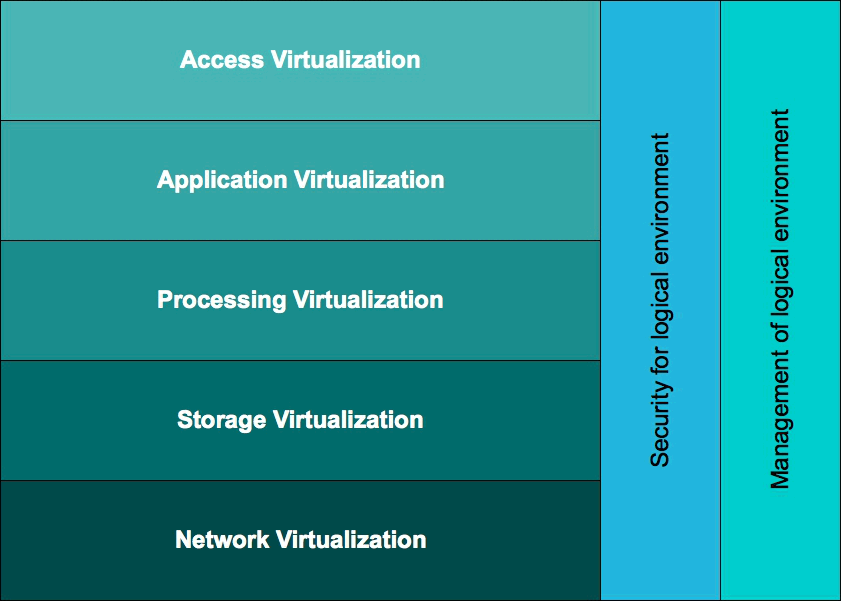 During our studies for the recently minted Cloud Computing Infrastructure subject at UTS, we studied the Kusnetzky Group Virtualisation Model. Developed (surprising though it may seem) by the Kusnetzky Group, it identifies several distinct layers of offerings beyond those of the somewhat overused NIST Service as a Service acronyms.

Most of the layers seemed pretty self explanatory:

These actually do run down, though

Intersecting these layers like syrup dripping and running down a lovely stack of soft pancakes, we have the management layers:

Which brings me to the first and highest layer in the Kusnetzky Virtualisation Model. The other layers seemed to fit into place in my brain fairly easily. I did like how the management layers were articulated too, though I think a specific provisioning layer separate from management would make sense.

What had me scratching my head was access virtualisation. I assumed it had little to do with virtualising a Microsoft consumer database. Oh Ruben, you so funny.

From what I've been able to research, access virtualisation has to do with the hosting of software on a server, and the rendering of said software on a separate client device. This client device is able to interface with the application, and determine how best to render it. In this way, it's similar to the NIST definition of SaaS, but with perhaps a little more logic on the client side.

There could be circumstances where that distinction is important. In the case of phones, a user could choose to view a phone, tablet or desktop optimised version of a web application, or even use an installed thick client application that calls the server hosted software.

I could be misunderstanding this distinction; I'm certainly open to correction. If it turns out there is no such distinction, perhaps I should create a Ruben Sandwich of Virtualisation model. That has a nice Burger Ring to it.