Last week I commented that I was relieved the Mac Pro tower existed, but that I’d replaced most of my earlier Mac Pro’s tasks with FreeBSD boxes. It spawned a couple of interesting threads on Twitter.

My current home lab setup is an HP Gen8 Microserver bhyve box, and a desktop I built for games before remembering I barely play games and subsequently dual-booted as a FreeBSD desktop. I realised neither were originally built for FreeBSD, so what would a purpose-built tower replacement look like?

This was my high-level wishlist jotted down over coffee this morning:

And then we get to enclosures. Most PC ones are ghastly, to put it charitably, and follow the Ford Model T school of colour choice. But there are a few that are inconspicuous enough and super practical: Supermicro and Chenbro make some pedestals with dual 4-drive backplanes and mounting for E-ATX, and are well laid out internally with shelving and discrete cooling zones. Here’s Chenbro’s SR107: 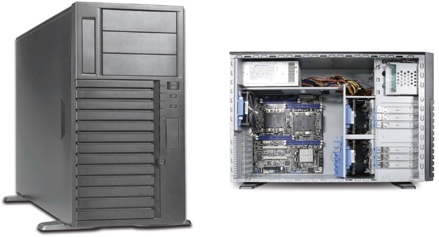 As I said on my Mac Pro post, I also want to eat. Clara and I also have more travel on the horizon, so for now my existing setup will need to last a little longer. But I’ll post my progress with this project.