I love finding tranquil pictures on Wikipedia or Wikimedia Commons; they make great desktop backgrounds for work machines. This image of the Mulgrave River was taken and uploaded by 04marjees in 2007, which is already a decade ago. That’s not tranquil, that’s crazy! 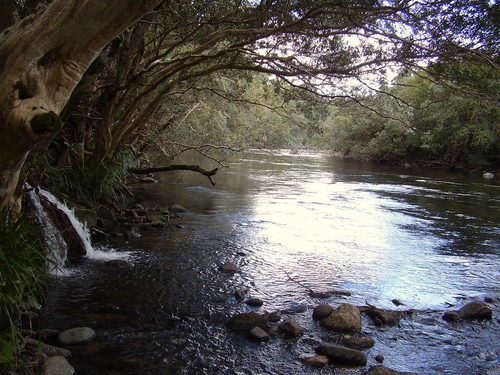 From the image’s description:

The Mulgrave River running through the Goldsbrough Valley to the south of Gordonvale. 17 September 2007 (original upload date)

This is the accompanying article on Wikipedia:

The Mulgrave River is a river system located in Far North Queensland, Australia. The 70-kilometre (43 mi)-long river flows towards the Coral Sea and is located approximately 50 kilometres (31 mi) south of Cairns.

And the article for the aforementioned municipality:

Gordonvale a small sugar-growing town and locality situated on the southern side of Cairns in the Cairns Region, Queensland, Australia. In the 2011 census, Gordonvale had a population of 6,214 people.