Barely any sleep was had on the aforementioned flight; we had strong turbulence the entire time. It also didn’t help that I was congested! So I’ve decided to stay awake and force myself to sleep at the normal time here.

The staff at SFO were lovely, and I was lucky enough to be able to use ESTA again to breeze through some horrid looking queues. Then it was back to the boss’s house, and out to the OrionVM office in the Financial District.

My first trip on the Muni, and I smelled pot. To be fair, it took several stops on that trip. How I know what pot smells like is an exercise in you hey look at the kitten!

The view from the 23rd floor is schveet. I loved the Gothic-style roof on this tower across the street: 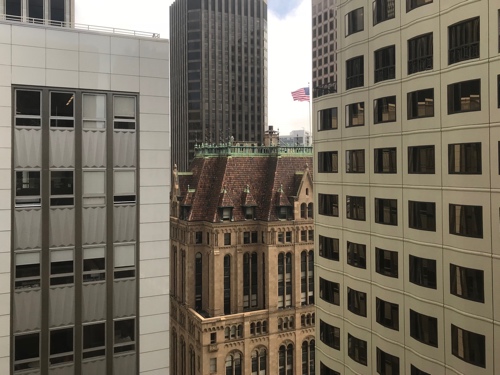 I looked it up on Apple Maps — which is way faster here — and it’s the Hunter-Dulin Building according to Apple Maps. From Wikipedia:

And the way I can tell I’m in the US? From where I’m sitting, I can see three rooftop flags!