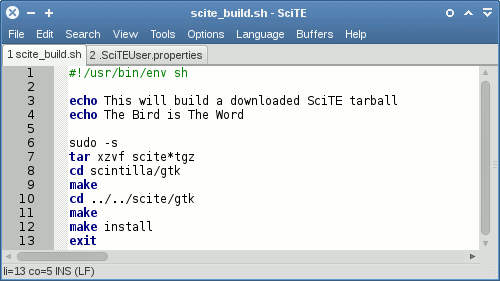 I thought I'd tried every conceivable editor from the IBM E Editor to Vim and everything in between, but I'd never used SciTE before. #herpderp!

And you call yourself a hacker

SciTE is a simple, cross platform text editor with a tabbed interface, syntax highlighting for all the major suspects and a trippy icon. It also reads like "science" which is just too cool. It was originally developed by Neil Hodgson in 1998 to demonstrate the open source Scintilla editing library, but is now a fully featured application in its own right.

MacPorts has the latest version, and it's also available on the App Store. Fedora 17 had a fairly dated 2.x version in its repos, so I downloaded the latest and greatest 3.2.3 release and built it. The tarball also came with the latest version of Scintilla.

The output from make install. On Xfce it doesn't matter that it only installed a 48x48px icon in pixmaps, but this won't cut it on Gnome 3!

The beautiful, simple Geany IDE which I've been using for many years uses the same Scintilla library that SciTE does, and there is a bit of a family resemblance in the layout of the editing area.

On the Vim/Emacs continuum of kitchen-sinkness, SciTE falls more on the Vim side. The initial configuration is fairly sparse, and it's up to you to customise it the way you want. The first things I did were turning on line numbering and the status bar, which helpfully shows which column the cursor is in, and what type of newline is being employed (in my *nix case, LF). No doubt these can be customised.

User configuration is stored in various *properties files which you can conveniently access from the Options menu. I haven't had time to look into this so far.

In terms of usability, it employs all the same key shortcuts we're used to in other applications, such as CTRL+S for save. I'll admit in Geany I never have this problem, but in SciTE I keep reaching for that escape key to start hammering away my Vim shortcuts. Perhaps it's the minimalist interface ;).

Pushing onto my editor stack

For someone who otherwise likes minimalism and doesn't install things unless he really needs them, the last thing I need is another editor. On this ThinkPad right now I have Gvim, Geany, LaTeXila, NetBeans, JASSPA MicroEmacs, Torvald's me, Bluefish and Leafpad from Xfce. I've also been told to try Sublime Text, and I have Chocolat on my Mac. I'll commit to one eventually ^_^;;