Literally two days after I wrote about the current state of music players, Om Malik chimed in:

It is not just Apple. All music apps at present suck. From Spotify to Tidal to Qobuz to Apple. Do a comparison — all shit.

It’s the frustrating thing with so much current consumer tech. It could be rose tinted glasses, but I swear certain things were better before.

I love and recommend The Old Reader for anyone who wants to get started reading RSS feeds. But there’s one feature I think does more harm than good, at least in how its currently implemented.

Check out this on the landing page:

Would you consider any of these inactive, based on those reported timelines since their last post? I wouldn’t!

I’ve long reached for John Siracusa’s Hypercritical as an example. He writes a few posts a year, sometimes even fewer. But they’re always worth a read, and genuinely exciting to see when they pop up.

I tend to write every day, but that’s only one style. Some may even say it’s worth less, especially compared to someone who spends six months on a personal project and writes about it.

Please don’t let this be another hang up if you’ve considered writing but are worried about how often you could post. A well written post about a project every other year is already hugely valuable.

In 2020 I talked about how chunking two-factor authentication codes made them easier to remember and type. I’m happy to see more sites doing this.

But now we face a new problem! Australian toll-free numbers are six digits, so I get messages like this:

Guess which number I memorise and type each time.

Humans are squishy, silly creatures. We don’t read words, we see patterns. I suspect the same phenomena is happening here. In a hurry to log in, we see a string of numbers and we enter them.

The real answer is diligence. Actually, the real real answer is better auth. But in the meantime, I wonder what more we can do to make these obvious. Maybe an emoji telephone before the number, or capitalised text for “security code”? Do SMSs get interpreted as phone numbers with underlines if the word “tel:” is added? Should they?

I’m still getting through everyone’s feedback over the last week, appreciate your patience! Today’s comes from Brad concerns hostnames:

I’ll go you one better on the host naming scheme…Name your physical boxes after Star Trek ships… And the use their registry number as the pool name.

For instance, I have the following machines in my network:

I would use Babylon 5, since it is clearly superior, but there were only a handful of ship names, and the White Stars were all numbered. :D

That’s brilliant. There’s an opportunity for fun when we start dealing with hostnames for hypervisors with guests, or for storage pools. The logical, rational, and boring thing would be to name them for their intended use, application, or a FQDN. But where’s the fun in that?

My most recent homelab machine got an upgrade from Xen to bhyve, which I’ve named holo for Hololive. This lets all the guests be named for my favourite Hololive streamers, like Ina, Watson, Bae, Kronii, Moona, Suisei, and Reine. Maybe Brad does something similar with ship names, but I also try to match the hostname with the personality of the streamer.

And as for Brad’s assertion about science fiction, I don’t entirely agree (!) but I can relate. I put Trek first because it’s where I grew up, but I’d put Babylon 5, Andromeda, Red Dwarf, both Stargates, and far too much sci-fi anime like Battleship Yamato above Star Wars, for example. But that might just be because I don’t like Star Wars.

This is going to be a bit of a nostalgia post again, but I’m also interested on what people’s thoughts are for portable music players in 2022. But let’s set the scene.

a widescreen iPod with touch controls… a revolutionary mobile phone… and a breakthrough Internet communications device.

Retrospective writers routinely miss that the order here was just as important as the features themselves. Rumours swirled in the 2000s about Apple releasing their own phone, but the market still saw Apple as the iMac, iPod, and iTunes company that popularised digital downloads and massive portable music libraries.

It’s hard not to see modern iPhones as having reversed this order entirely. They’re Internet communications devices that happen to have phones, and maybe even a music player buried somewhere!

Which leads us to a sentence with nine words. Have you also noticed that the music player on modern iOS is a bit… rubbish? A simple, customisable navbar in the footer has been replaced with redundant menus, slideout modal windows that break the back/forward flow, and general sluggishness that’s embarrasing considering the order of magnitude better hardware we have now. Simple inline controls on headphones for (un)pause have been flaky enough to be broken for years. One need only look at an iPod Classic’s menu system, or a version of the original iPhone music app (called iPod) to see how far we’ve slid.

In Apple’s defence, it still syncs with the Music app on Macs when it could be bothered, but it’s clear the future of the platform is being written by streaming services. Almost nobody collects local music anymore, not least CDs or other analogue formats, and only weird people rip, mix, and sync.

Apple have also been transparent with their (meaningful) departure from the music space, both by removing the 3.5 mm headphone jack, and cancelling the iPod line. Previous phones could use wireless earbuds and their expensive new cans just fine, but these new phones don’t work with regular headphones at all. I suppose it’s internally consistent behaviour from a company that pours all this effort into the electronics and optics of their phone cameras, but cans Aperture.

(Android manufacturers also mocked Apple for removing the jack, then did the exact same thing, just as they always do. We can’t be seen as falling behind the market leader in reducing accessibility, damn it)!

All this comes together to make today’s phones objectively worse for listening to music than previous generations. It’s a shame, because they could have easily maintained backward compatibility and a good local music app if they wanted to. It’s not like they’re short of cash.

So what to do now. Clara and I have been having so much fun buying and collecting music again, and I want to take it with me. I had huge success with splitting work and personal stuff into separate devices again, and I’m thinking I need to do the same for music. A dedicated, portable player that can’t interrupt me with a million notifications sounds like bliss.

I have plenty of gear I can bring out of retirement, but ideally I’d like something that I can just drag and drop audio to, be it my Mac, FreeBSD tower, or Linux. The problem is, capacities in these dedicated players from the likes of SanDisk and Sony haven’t budged in more than a decade, or have such poor build quality or acoustics that they may as well be making those plastic Crosley turntables.

I’m willing to concede that I have a niche use case here. But surely I can’t be the only one.

I realise now the title of this post could be read a few ways. Britannica certainly came up before Wikipedia… by more than a century! And if I were being precise, I’d have to specify I’m talking about the Encyclopædia Britannia, not the personification of Britannia, or the Britannia Empire from Code Geass. And people say I get distracted easily.

Related to my Music Monday post yesterday, Angélique Kidjo was the first web search I think I’ve ever done where the first result was to Britannica, not Wikipedia:

I feel like there’s a parallel universe where Kodak produces the best selling and most respected digital cameras, digital LEGO let builders craft with blocks in a massive sandbox mine environment, Flickr is also the way people share photos on their phones, and Britannica rules the open web with community posts and in addition to their professionally written content.

If we think the butterfly effect is true, it wouldn’t have taken much for these to have happened instead. Maybe a short whisper into someone’s ear, then slinking back into the night. Or the Tardis. Or the USS Relativity.

Today’s Music Monday comes via the random button in my music player, and to my childhood in the 1990s. I always thought the harmony was beautiful. 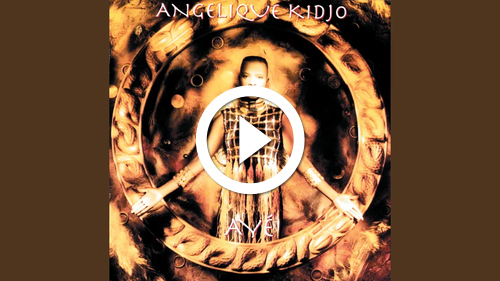 This was my favourite of her albums back in 2007, and it might still be.

Today @fraveris shared one of my favourite contemporary artists! Here’s her Country Garden:

Her collection is available for purchase on paper and canvas on McGaw Graphics. The site describes her technique that I find so compelling:

Working in oils and acrylics on gessoed hardboard, Karen uses both brushes and painting knives to build up glazes of transparent color, finishing with layers of opaque color painted loosely so that the vivid first layers show through in places; the end result often reminds the viewer of stained glass.

I’m still in a state of disbelief. Australia’s populist leader, and his conservative coalition government, have been voted out of office. I’m choking up the same way I did when my American friends voted out Trump.

Labor aren’t half as progressive as their proponents postulate, and their record on digital rights is suspect. But they have to be damn sight better than a leader who sees a crying, burning country and says “I don’t hold a hose”, then fucks off to Hawai‘i. It’s been a decade of wasted opportunities, scandals, ethical failures, financial irresponsibility, and international gaffes.

On the left we got the biggest Greens result ever, and my right-of-centre friends delivered us an unprecedented slew of new independents who stood for responsible climate action. Prime minister Anthony Albanese leading a minority government with these new MPs, or tempered by a robust Senate crossbench is about the best I could have hoped for.

I thought the reason for snacks near checkouts was common knowledge, but I saw this CNN report shared with surprise in a few places:

“Impulse purchasing represents a much, much larger component of consumer behavior than people realize,” said James Burroughs, who studies consumer patterns at the University of Virginia’s McIntire School of Commerce. “The front of the store is prime real estate to put impulse items.”

[S]tores map out nearly every inch of their physical environment to influence shoppers' decisions. For example, the dairy case is placed way in the back of stores, forcing customers to wander and scoop up plenty of other products before they buy milk. The meat case is often over on the other side of the store to get shoppers to walk around and toss even more items into the cart.

One thing I didn’t know was that people are trying to change this:

Top grocery chains in the United Kingdom have eliminated candy from checkout altogether. In the United States, Berkeley, California, passed a “healthy checkout” law in 2020 regulating which products can be sold near the register. Out: junk food, candy and soda. In: fresh or dried fruits, nuts, yogurt and sugar-free gum.

This is a great idea at addressing a clear market failure. A healthy population is better than an unhealthy one, so making the choice for the latter easier for people can only be a good thing.

Nuts have been great for this personally. A small handful from my desk with a cup of black coffee can keep me full and happy for a long time, and was another great way to wean myself off sugar. Even the last dark chocolate bar I had a bite of tasted sickly sweet before I gave it up for an almond.